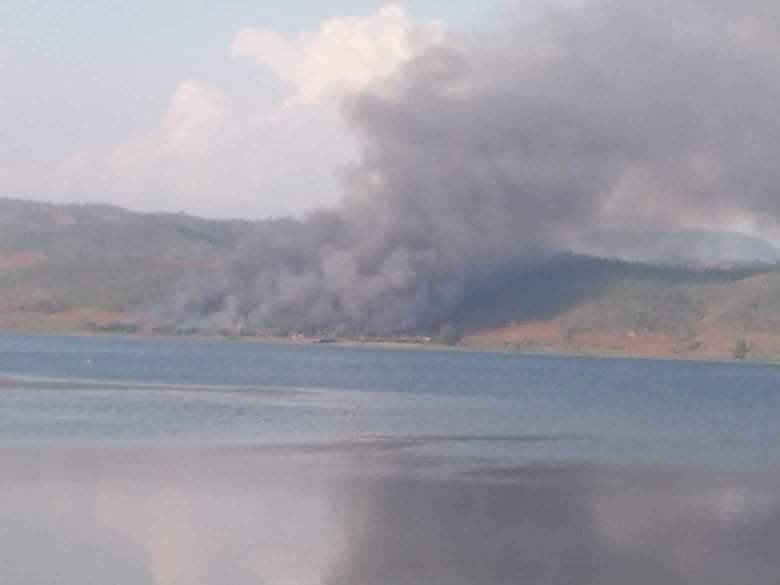 The Burma Army (BA) burnt down houses in a village in Pekon Township, after fighting with resistance forces in the region in southern Shan State. Villagers from Soung Nan Khe and several surrounding villages had already fled before regime troops entered the border area with Karenni State on Monday.

“We could see smoke rising from a distance,” said a man who lives near Soung Nan Khe. He said they were too scared to go and see what was going on and told Kantarawaddy Times that everyone in his village was preparing to flee.

According to locals, Soung Nan Khe has 50 houses.

An officer from Battalion 3 of the Karenni Nationalities Defence Force, which is fighting the regime alongside the Pekon People’s Defence Force in the region, told the Kantarawaddy Times that villagers from Nang Paw Lon and Sin Phyu also fled when they learned that BA Light Infantry Battalion 422 was on its way.

According to the officer, fierce fighting broke out on the east side of Lake Pekon on Sunday between the KNDF and the PDF against the BA and the Pa-O National Army, which has turned into a People’s Militia Force allied with the regime. The BA attacked the resistance groups with air strikes, with casualties on both sides. However, Kantarawaddy Times could not independently verify this information.

By Kantarawaddy Times Tuesday, June 28, 2022 Civilians traumatised and depressed by over a year of...
Read more
News