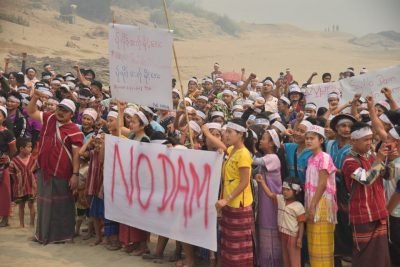 Civil society organizations have renewed calls to permanently halt dam construction on the Salween River, which runs through eastern Burma.
The calls came on March 14, commemorated as International Rivers Day, where a ceremony to mark the occasion was held in Ei Htu Hta village in Karen State’s Mutraw (Hpapun) District.

The Save the Salween Network and the Burma Rivers Network organized the event. Representatives of Karen, Karenni, Kachin, Chin, Mon, Rakhine, Pa-O, Taku and Ta’ang communities attended the event.

“We are trying to show our opposition to dam construction and highlight our standpoint that we don’t want dam construction on any river in Burma including the mighty Salween,” Nang Moe Thauk Pan, who is working with Save the Salween Network chapter in Karen State, told Kantarawaddy Times.

The Salween River runs through Shan, Karenni, Karen and Mon states. The previous regime in Burma approved plans to build six mega-dams along the waterway. The projects have been consistently opposed by local communities who live along the river for the dams’ negative environmental and social impacts, which would include widespread flooding and land loss.

Kyaw Htin Aung, who attended Sunday’s event as a representative of Karenni State civil society, said that people downstream would suffer from planned dams to the north.

“Water currents would change in the river. The riverbanks will then erode, and villages would have to relocate. It will affect their livelihoods. There will be many impacts on Shan, Karen and Mon State,” he said, in addition to Karenni State.

The dams include projects near Kunlong and Mongpan in Shan State, Ywar Thit in Karenni State, and Hatgyi in Karen State.

According to a statement released by Save the Salween and the Burma Rivers Network on International Rivers day, these dams must be immediately stopped by the multinational companies backing them, and no further hydropower projects undertaken on the main rivers or their tributaries in conflict zones in Burma’s ethnic states.

They called on those involved to respect the rights of indigenous people to manage their resources, and to halt any dam projects as long as the civil war continues and Burma does not operate according to a federal democratic system.